Portraying that it has been a long time since the last time the White House office considered competence, compromise, and caring, regardless of the government shutdown shut down. The closed door is a symbol of inaccessibility. The single veteran is a representative of all the soldiers and veterans of our country, not being let into national monuments that were initially built in honor of their sacrifice and our country.

1) Which side is supported by the framing of the cartoon? This cartoon targets the GOP and the Tea Party, saying that they only bicker and argue.

2) What evidence can you give that shows the cartoonist supports one side or the other? Portrays the veterans in a good light and the government in a negative light.

3) What “reality” is constructed/framed about your issue? Yes, it’s true that there isn’t much competence, compromise, or caring in the White House these days. “The House and Senate did agree on one thing. They finalized legislation Monday to keep paying troops in the event of a shutdown” (Yann, 2013).

This Cartoon drawn by Andy Marlette was developed during the October 2013 government  shutdown. The overall attitude during the shutdown was negative and most people viewed the government as being irresponsible for allowing it to happen. One of the groups that was especially upset was the U.S Veterans that struggled to get their bills paid due to furloughed government workers who couldn’t approve V.A  checks (Meshad, 2013). This cartoon shows several Vets holding up congress who is posing as an American flag. This image is meant to symbolize the monument that was made after the soldiers raised the flag during Iwo Jima during WWII.

This cartoon is meant to support the individuals affected by the government shutdown  and in particularly the veterans who fought for the country. This cartoon displays a form of irony by showing that seasoned soldiers who had fought for the freedom of America are now fighting just to survive due to the government shutdown that put their benefits needed to pay their bills to a screeching halt (Meshad, 2013).

In the cartoon it show Congress hanging helplessly on a flag pole while the old veterans pull with all their might to keep it up. This uses exaggeration by making Congress seem completely ridiculous while making the veterans appear as the proactive heroes diligently attempting to keep the country together even in their fragile state. It also shows one veteran knock over the “closed due to government shutdown” sign showing how upset they are that they can’t enter the countries National Parks. 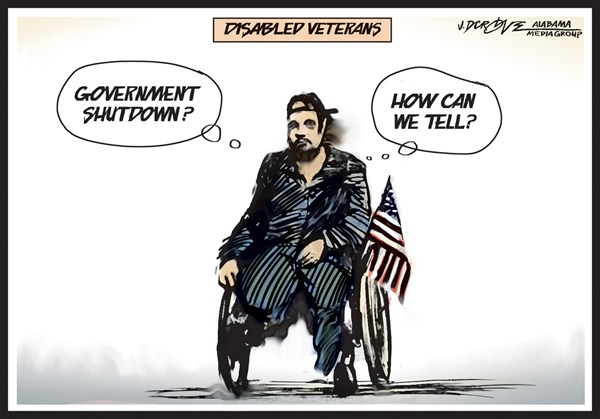 Title of cartoon: Government shuts down on veterans

This cartoon by J.D. Crowe portrays a wounded veteran in a wheelchair asking two simple questions to the reader. The first, “Government shutdown?”, and the second, “How can we tell?”. The government often is criticized for its  treatment of veterans and their benefits, during the shutdown a massive demonstration of  veterans gathered together at the World War II Memorial in Washington D.C. This protest was to show displeasure to Congress and other officials. During the shutdown some 5.1 million veterans were threatened with a missed payment of compensation, 433,000 of those were completely disabled (Bacon, 2013).

This cartoon deals more with how veterans  were being treated before the shutdown, Was anything really different for veterans during the shutdown or did they even notice a difference? This cartoon suggests the later, it suggests that most veterans didn’t feel like was doing anything for them before.

The cartoon frames this issue as a negative for the government and shows potentially how veterans have been treated in the past and were easily passed over during the shutdown.

The evidence in this cartoon is in its words, specifically the two questions being asked by the veteran,

The reality constructed here is potentially that it shouldn’t have taken a government shutdown to bring attention to the issue of veterans and the support they should receive after serving the country. 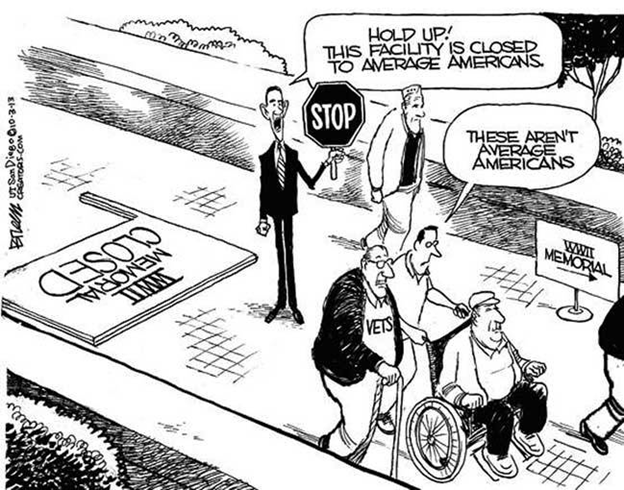 In this cartoon we see several veterans ignoring President Obama who is trying to prevent them from entering the WW2 memorial. Obama is holding a stop sign and saying “Hold up! This facility is closed to average Americans.” A man pushing a veteran in a wheelchair responds “These aren’t average Americans.” One of the most affected groups due to the shutdown, veterans would have suffered further had the shutdown extended later into the month. There was a great deal of frustration directed towards the government from both the 600,000 veterans federally employed as well as the 3.8 million veterans that would not receive disability compensation had the shutdown continued. (Freking, 2013)

This cartoon supports the millions of angry veterans who have served our country honorably and are anything but “average”. The veteran’s actions in ignoring Obama and his stop sign support an attitude of rebellion against the government’s restrictions towards an incredible generation who have sacrificed more than any politician.

This cartoon is clearly attacking the government, specifically the president, for the repercussions affecting veterans due to the shutdown.  The President’s comment in the cartoon clearly displays a lack of respect for those among us who we should respect the most.  The illustrator is obviously in support of veterans and the things they are entitled to, such as visiting the WW2 memorial whenever they please.

The reality being constructed is that not only has the government’s actions unjustly affected the greatest Americans among us, but that the government doesn’t seem to care. The cartoon presents the President himself as lacking the proper respect for veterans who deserve only the most honorable of treatment. In the veteran’s defiance to heed the President, this cartoon sends the message that no matter what the government says or demands, they can not and shouldn’t ever be able to belittle the sacrifices made by the veterans of our country.